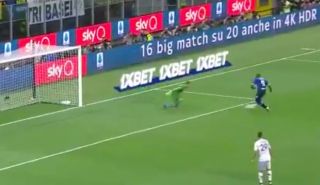 Romelu Lukaku has scored on his Inter Milan debut after making the switch from Manchester United this summer.

The Belgian international signed for Antonio Conte’s side in a huge £74m deal this summer (BBC Sport) , as he was no longer wanted by boss Ole Gunnar Solskjaer.

Lukaku is a proven goalscorer and repaid the faith showed in him by the Serie A side, pouncing on a goalkeeping error to slot home with his right-foot.

The goal was reminiscent of a goal he scored in United’s famous away win in Paris last season, where he capitalised on Gianluigi Buffon’s mistake dealing with Marcus Rashford’s shot.

We expect this to be the first of many goals Lukaku scores this season; he will tear it up in Serie A this year and don’t be surprised to see him close to the golden boot award at the end of the year.