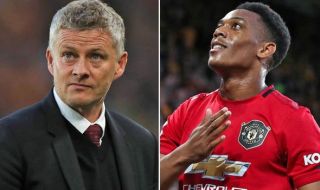 Manchester United may be forced into keeping Alexis Sanchez this month, even though the club was willing to see the Chile international leave not long ago.

According to the Guardian, Anthony Martial’s injury scare on Saturday against Crystal Palace could put Sanchez’s loan move to Inter in doubt.

Martial has been a preferred option in attack for Ole Gunnar Solskjaer this season and has scored two goals from the opening three goals. Losing him now or at any stage this season would stretch Solskjaer’s squad, lacking in attacking depth, and United are already struggling to break teams down.

It started so well with four goals and a clean sheet against Chelsea but that clearly wasn’t a true summary of United’s goalscoring approach. Teams will come to Old Trafford and low press knowing their high chances of getting at least a point.

Martial complained about a thigh problem in United’s defeat to Palace and the club are now waiting on results from a scan before learning how long he will be out. If it’s serious and Martial is out for a while it wouldn’t surprise me if Solskjaer decided to keep Sanchez — unless a permanent deal emerged…

Solskjaer played down concern over Martial and Luke Shaw, who came off with a hamstring injury. “We’ll have to wait and see,” the manager said. “Hopefully they won’t be too bad and maybe we can have them training during the week.”

The line from the Guardian’s report on Sanchez claims the latest stumbling block with Inter came from his £20m-a-year salary. United want the Italians to pay around €6m (£5.5m), but Inter want a sum closer to €3m.

It was a year ago that a deal for Inter to sign Martial was deemed possible, with José Mourinho willing to offload the forward, but now it could be a matter of Sanchez joining former United striker Romelu Lukaku at the San Siro.

It’s amazing what a year can do for a follower considering Sanchez was brought in to take Martial’s place in the team.