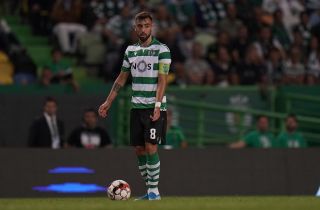 Manchester United fans are unhappy with the club’s decision not to sign Bruno Fernandes this summer.

The Sporting Lisbon playmaker was credited for three assists against Portimonese.

Fans are not satisfied with Jesse Lingard’s contribution of late and Fernandes would have occupied his role had he joined United. He has not contributed to a single goal either by scoring himself or assists in eight months.

A report from the Daily Mail claimed United scouts were unconvinced by Fernandes’ passing, so decided to pull their interest – and it’s fair to say that decision has left many fans scratching their heads (Fred was signed a year ago for £52m and is hardly renowned for his lack of ability to keep the ball)..

Of course, Fernandes is playing against weaker opposition in the Portuguese league, but he’d surely be an upgrade on Lingard, who is currently offering very little to this United side.

Today, Bruno Fernandes had more assists (3) in 90 minutes than Jesse Lingard has had in his last 37 games. pic.twitter.com/3MgFdC7CSq

He got more assists in one game than Lingard will get in a year. Our midfield is terrible, we lack creativity and struggle to break teams down – Bruno would definitely help with that. And he was literally begging for a transfer to England. What a wasted opportunity.

We kept lingard and didn’t get Bruno fernandes because ‘he gives the ball away too much’, our board are so clueless.

Just a reminder that Fernandes was snubbed because this clueless board thinks Lingard will peak this season. Absolutely ludicrous.

Look at what we missed on Bruno Fernandes. Man did 3 assist yesterday 😒😒 instead we are stuck with Lingard that can’t hold a ball 🤦 pic.twitter.com/5mBxidLU2k

The only issue I have with the tweets above is the one replying to the club’s official Twitter account, directing a tweet to new signing Daniel James.

James is a row young player trying to find his feet in the Premier League — after impressing with Swansea City in the Championship. When he joined it was never expected that he would be an instant star, so just because we’re having problems in front of goal at the moment it shouldn’t be taken out on the Wales international.

Fernandes, or a player of his ilk, should have been signed along with James, who already has two goals to his name as United player.