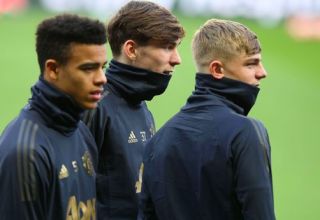 Luke Shaw has been ruled out for at least a month after pulling up in United’s defeat to Crystal Palace on Saturday.

Young is expected to start against Southampton on Saturday after coming off the bench to replace Shaw, but some Reds think Solskjaer should consider an academy star for the left-back role.

Brandon Williams has started every game for the u23 side this season, in an unbeaten start for Neil Wood’s side.

The youngster has four assists in the opening four games, and is yet to concede a goal.

Williams is clearly an exciting player for the future but it seems unlikely he will be thrust into first-team action by Solskjaer against Southampton.

Perhaps the 18-year-old can make the substitutes bench for the first-team as full-back cover with the Reds currently short in the area.

Loads of United fans have backed Williams to make the first-team step up:

I beg Ole picks Brandon Williams over Darmian against Southampton. I'd rather have him on the bench.

If Ole really believes in youth as he wants us to believe it then he would play Brandon Williams ahead of Ashley Young, Angel Gomes ahead of Jesse Lingard

Time to step up? pic.twitter.com/TPIaPp8AH6

Time to step up 🔴💉 pic.twitter.com/3Mi7GdBNRL

It would be tough to throw him into the deep end when he hasn't played at the top level before. But the injuries to Shaw and Dalot should see Brandon Williams make the bench at least. His early season form means that he would be there on merit. #MUFC pic.twitter.com/sQ50deS9Iz

Brandon Williams SZN incoming. You can just feel it #MUFC

I wish more of our fans knew about Brandon Williams man,so so promising
Off the ball movement, Underlaps/Overlaps well,has good pace,HAS A FINAL BALL,and runs his socks off all game

Solskjær on Brandon Williams in March: "Brandon is a quick full-back who can play both sides. It's the first time he's travelled with us and he didn't expect to come. But that's why you're in the Academy — we believe in you and suddenly you can step up." #mulive [mu]