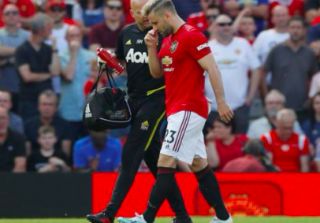 Manchester United have been dealt a big injury blow, with Luke Shaw facing other a month on the sidelines.

Shaw pulled up in the first-half of United’s defeat at home to Crystal Palace on Saturday, and is now expecting a lengthy spell out of action according to the Times.

The left-back has been heavily criticised in the early stages of the season, but he will still be a big miss for Ole Gunnar Solskjaer given the lack of depth in the area.

Diogo Dalot is currently recovering from injury, meaning Ashley Young and Matteo Darmian are Solskjaer’s only viable selection choices for Saturday’s game away to Southampton.

Young is expected to start at St Mary’s after coming on for Shaw at Old Trafford on Saturday.

Shaw, 24, is expected to miss games against West Ham and Leicester City, but has the international break to recover and work on getting back to full fitness.

Luke Shaw to be out of Manchester United team for at least a month with hamstring injury, reports @hirstclass, with Ashley Young expected to start Saturday’s game away to Southampton. https://t.co/1xwA1d8bUG