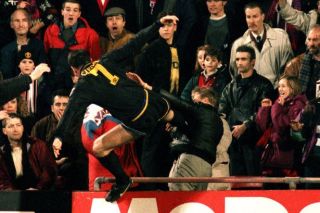 Paul Pogba and Marcus Rashford have both been racially abused on social media after missing penalties in the past week.

Former United centre-forward Cantona infamously launched into a kung-fu-style kick on a Crystal Palace fan in the crowd after claiming he was abused during a game at Selhurst Park in 1995.

“If something drastic is not done soon we might be reliving an Eric Cantona moment and, if we do, the game will only have itself to blame,” Crooks told the BBC.

“I never thought I’d be talking about footballers receiving racial abuse in this day and age, and certainly not on the industrial scale we are talking about at the moment.

“Racial abuse on social media is out of control and abuse in football grounds is not far behind.”

Cantona took physical action against racism which the authorities don’t want a repeat of.

Crooks is coming from the viewpoint that it shouldn’t come to that — not in this day and age — so the governing bodies need to inflict punishments.

People need to be held responsible for their actions and it shouldn’t take a footballer acting for the greater good and getting a ban as a result for them to see it serious enough to act on.

No sane person wants to see racism in football. Nobody needs to hear or see it when they take their children to the football. It needs to stop.