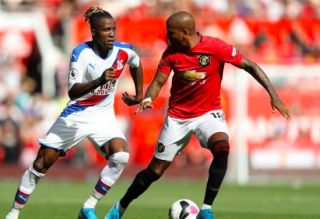 Palace tweeted a video of former United winger Wilfried Zaha taking on Young with the caption ‘Wilf had him dancing’. But United’s fullback still managed to make a recovery block despite being dazzled by the the trickery of the 26-year-old.

Townsend came to Young’s defence strongly, suggesting Young deserved respect for his efforts against one of the ‘leagues best wingers’.

NEXT:Huge injury blow for Man Utd as defender ruled out for at least a month

His response has been praised by lots of United fans who appreciated the respect he showed Young.

With Luke Shaw now out for at least a month, as per the Times, Young will have to fill in at the left-back role for the upcoming games.

We expect to see the 34-year-old start in Saturday’s game against Southampton at St Mary’s.

See Townsend’s response to his own club below:

A 34 y/o ex winger vs one of the leagues best wingers…. he gets destroyed twice yet still manages to block the cross…. we should be applauding this not making fun of it #Respect https://t.co/AD5Nlyt7Mu