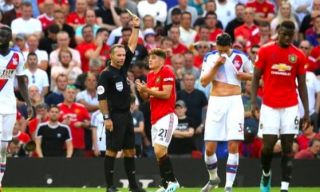 Ole Gunnar Solskjaer has defended winger Daniel James after he was booked for diving in a second consecutive game in the home defeat to Crystal Palace.

United should clearly have been awarded a free kick for the incident yet James received a second yellow in as many games for simulation.

James was also punished at Wolves on Monday night after going down rather easily under a challenge.

And Solskjaer addressed the concern that James will get a reputation amongst referees after Paul Tierney’s decision.

“Yes. That is what you do get,” Solskjaer said as quoted by BBC Sport when asked whether James will pick up a reputation.

“That is why I raise it here.”

“At that pace, a touch or a nudge will be enough for him to fall,” said the Norwegian following referee Paul Tierney’s decision during United’s surprise Old Trafford loss.

“I am 100% sure there is contact between Dan and their defender. If you look at the video, there is contact and [there was in] the Wolves game. He has been unlucky. Neither yellow card should have stood.”

James scored the equaliser for the Reds with a clever finish late on, but it proved to be in vain as Patrick Van Aanholt sacred the winner in the final moments, after a goalkeeping error from David De Gea.

It’s unsurprising that Solskjaer has come to the Welshman’s defence after the unjust decision on Saturday. He did not have his best game for the Reds against Palace and his crossing was often poor in the final third, but the goal will only give him more confidence.