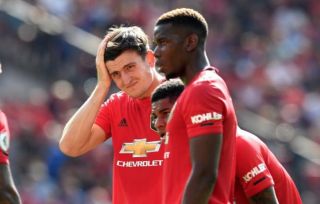 Michael Owen has admitted he was not surprised by Manchester United’s defeat at home to Crystal Palace yesterday.

Ole Gunnar Solskjaer’s side suffered their first defeat of the season after Patrick Van Aanholt scored a last gasp winner.

And the former United striker says he has not been convicted with the Reds for up to nine years now:

“Well, I was watching the game with you and after 10 minutes I said “I don’t fancy Manchester United today,” Owen told Premier League Productions, as quoted by the Express.

“They’ve been like this for a long time now, haven’t they. Have they convinced for, what, since Sir Alex Ferguson retired basically?

“Have they ever really gone on a run, apart from actually at the end of last season under Ole Gunnar Solskjaer? And then everything sort of fell to pieces again.

“But have they ever convinced anyone in the last sort of six, seven, eight, nine years?

“I’m not sure they have and I think they’ve got results like this in them.

“But they don’t play like a great team on a consistent basis, which is why, yes it’s a surprise result, but is it a really surprising result? I didn’t think so.”

In truth, Owen has done little but state the obvious here. It’s clear there are still issues at the club that are larger than the performance at Old Trafford on Saturday.

Solskjaer did not get all the signings he needed this summer to make this squad competitive for the season ahead. The Reds are particularly lacking in midfield and there is no creativity to unlock defences.

It’s not the time to overreact after one defeat this season but problems clearly still remain that were present last season. United need to find a way of creating more clear-cut goal scoring opportunities for the likes of Marcus Rashford and Anthony Martial when in possession.

Perhaps Juan Mata or Angel Gomes should be given a chance in the next game against Southampton next Saturday.