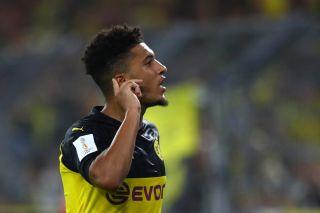 Despite having 71% in the game (BBC Sport), the Reds managed just three shots on target, and something has to change in attack for United against defences likely to sit back and defend deep.

Rather frustratingly for United fans, no attacking midfielder was signed this summer, despite the fact it was an area that clearly needing addressing.

Despite having Juan Mata and Angel Gomes among his ranks, Solskjaer has been persisting with Jesse Lingard in at the role, who is not delivering.

Many United fans think it’s time for United to sign Leicester playmaker James Maddison. The 22-year-old was linked with a move to Old Trafford this summer, and the latest report from the Mirror states that the Reds will go in with a bid for the youngster in January.

Another player fans would love to see in a red shirt is Jadon Sancho. The Dortmund winger has set the Bundesliga alight since joining from Man City in 2017, but surely United would need to secure Champions League qualification to have a chance of prizing the youngster to the club next summer.

See some fan reaction below:

United missing out on Dybala and Bruno Fernandes isn't the big issue IMO. The fact that we missed on Sancho and James Maddison is what will cost us eventually. Gem players that we so desperately needed. Their price will only go up by 20-30 million quid next summer.

Longstaff, Maddison and Sancho need to be done for next season. They could solve some serious issues we have in our team.

Maddison and Sancho are absolute musts for us next season, and this is on top of Pogba. If we lose him we'll need another attacking midfielder as well as Maddison. Left back is a priority too as competition for Shaw and a backup striker too. I wouldn't mind Longstaff either.

There's no point talking about who we should sign, the owners clearly don't want to spend money when we had a 70million net in a big rebuilding summer.. if they realise they need to spend.. Maddison, Sancho, DM, LB.. 4 players that change this side completely #mufc

I’d be looking at Lucas Digne from Everton to upgrade the left back position in January/Summer if I was Ole. Very good at free kicks too which is something we’re poor at. He’s probably targeting Maddison, Rice, Sancho, Moussa Dembele & McGinn too #MUFC

In reflection, this team has potential but not everyone in it is good enough to take it to that next level. We have a good core in terms of Rashford, Martial, James, Maguire, AWB. However it needs a Sancho, it needs a Maddison, and it needs a new left back. Time will tell.