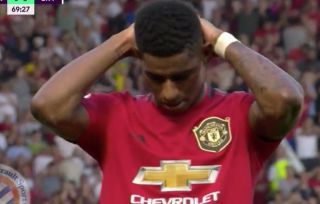 A brilliant attack saw United win the penalty with over 20 minutes to go as Scott McTominay was taken down as he drove into the box at full pace. A lazy foul but the right call after United were denied another penalty shout.

After last week’s drama — Pogba taking the penalty taking duties from Rashford and missing — everyone wanted to see who would take a penalty today if one was given.

Of course it did, and Rashford stood up to take responsibility.

The England international smashed his effort off the post and the ball went wide.

Watch the penalty miss below:

This just piles unnecessary pressure on whoever takes penalties for United in the future. Solskjaer needs to stick by Rashford and let everyone know.