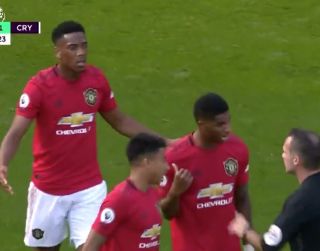 Manchester United are currently trailing 1-0 against Crystal Palace and have just had a penalty shout ignored by the referee as well as VAR.

Anthony Martial turned former Liverpool defender Martin Kelly brilliantly on the edge of the box and was pulled down as he struck the ball at goal.

It resulted in a goal kick…

What’s the point in VAR if it doesn’t flag decisions like these?

I mean, it’s either a free-kick on the edge of the box or a penalty.

Kelly makes first contact with Martial outside the box, but the contact straightens as he enters the box.

Watch below and make up your own mind: