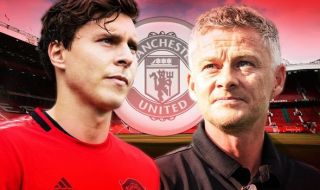 Victor Lindelof has brought to Manchester United by José Mourinho but looks set to finally blossom as a defender under Ole Gunnar Solskjaer.

The Swede has now hinted that the main difference between Mourinho and Solskjaer is how hard-working the latter has made his team.

Solskjaer made it clear since last season that he planned to work on his squad’s fitness and it already shows from the beginning of this season, with United looking to press high up the pitch and give their opponents very little time on the ball (unless your name is Ruben Neves).

United started Solskjaer’s reign brilliantly but had a terrible end to the season after the players appeared to look shattered from the difference in intensity.

So far this season the former United striker has overseen his side win against Chelsea while draw against Wolves. Lindelof and his team-mate will be hoping to get back to winning ways this weekend when Crystal Palace come to Old Trafford.

Speaking to the club’s official website, Lindelof said: “We worked very hard [in the summer] and you can see that in the games as well.

“We run much more now and have the capability of sprinting at high speed, even in the 80th or 90th minute. It’s very important to be able to do it in football. It’s been great.

“I think the fans are always behind us and we have been improving a lot. I reckon we can improve even more under Ole and the other staff.

“I think we work very hard for each other as a team and run a lot. I think that is what the fans want to see.”

Lindelof has been trusted to partner new signing Harry Maguire at centre-back this season, which is only right given he was one of United’s most improved players last term.

Chris Smalling and Phil Jones have yet to feature this season and it looks like Axel Tuanzebe has jumped ahead of the two defenders in the pecking order at Old Trafford.