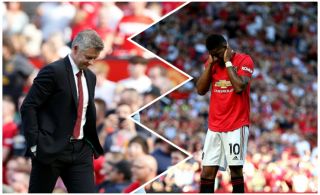 Manchester United have had a penalty awarded in their favour in each of their opening three Premier League games this season.

The first hit the back of the net as Marcus Rashford took responsibility from the spot.

Then last week, as the controversy over penalties at Old Trafford began, Paul Pogba had his spot-kick effort saved in the 1-1 draw against Wolves.

And today, the Reds had another penalty miss. This time Rashford found himself back on penalty taking duty and smashed his effort off the post and wide.

This won’t be an issue once United score from the spot again, which you’d hope will happen sooner rather than later.

Solskjaer came across very relaxed about the situation after the match, despite United just losing the match 2-1.

He keeps his faith in Rashford (and Pogba) to convert their next penalty kicks, but it may be time to give Anthony Martial some of the spotlight for once.

The Frenchman is usually one of the more calm figures on the pitch.