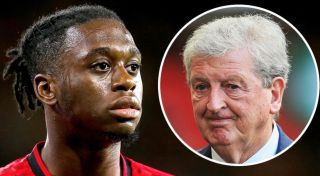 The 21-year-old made a big money move from Selhurst Park to United and have been a rock at right-back in Ole Gunnar Solskjaer’s side, so it finally looks like the Red Devils have a solid option in the role.

Speaking ahead of his side’s Premier League encounter with United this afternoon, Palace boss Hodgson thinks Wan-Bissaka is already in Gareth Southgate’s plans, with a call-up bound to come sooner rather than later.

READ MORE: Wan-Bissaka return and 18 y/o ready to step in for Lingard – What to watch out for this weekend

Of course, it carries weight that Hodgson was England manager previously.

Hodgson said, as per the Manchester Evening News: “There’s no reason for me to say he’s not ready, absolutely not. I’m pretty sure Gareth and his selectors are feeding back that this boy’s a good player, if we need him, this boy’s ready.

“We thought, we he was here, that we were talking about a potential England international right-back at some stage in the future.

“At the moment Gareth has got a lot of competition in that place, but that’s how I would see him developing. I don’t know how soon that will happen.”

The Eagles boss would know Wan-Bissaka better than most from working with him, and it’s telling that he isn’t surprised by how well he’s settling at United after winning Palace’s player of the year award.

He added: “The way he’s settled in so well at United has been not surprised, but very nice to see. It doesn’t surprise me because I know how well he can do, but it’s still not an easy task that he’s accomplished.”

Today for once, Hodgson will want his wingers to give Wan-Bissaka a roasting. We’re sure the Spiderman will cope.