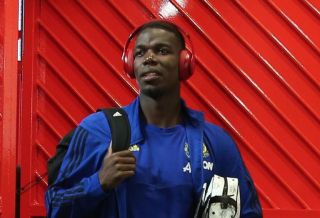 This is a nice touch from supporters after a week in which Paul Pogba was subject to racist abuse.

The French midfielder received messages of racist abuse on Twitter after United drew 1-1 with Wolves on Monday night.

Pogba missed a penalty in the second half after Wolves scored an equaliser through Ruben Neves, but it also caused controversy because he took the penalty taking duty from Marcus Rashford, who scored from the spot a week prior against Chelsea.

But none of that warrants abuse. It’s truly sickening that human beings can stoop to such lows as using racism in attempt to hate on someone.

It appears as though a group of United fans have got together to have a flag created before today’s game. Samuel Luckhurst of the Manchester Evening News claims it will be held up in the north-east quadrant.

United say this fan flag will be held up in the north-east quadrant today, following the racial abuse Pogba suffered online this week #mufc pic.twitter.com/Zo5HZIvhRV