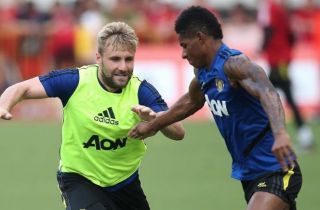 Luke Shaw went off injured against Crystal Palace with what appeared to be a hamstring injury.

The England international has had the misfortune of having to deal with a number of injuries in the past, and nobody wants to see him struggling again so early on this season.

United have only sorted out their problems at right-back by signing Aaron Wan-Bissaka, they don’t want to make matters worse on the left by seeing Ashley Young replace Shaw on the left (Diogo Dalot is another player out injured).

Young hasn’t been convincing of late and fans won’t be happy if this means he will replace Shaw for too long.

United are currently a goal down to Crystal Palace with the half-time whistle just blown.

Ole Gunnar Solskjaer must find a way to help his attacking players to break through Palace’s defence.

While the Red Devils dominated the early stages of the match, they didn’t create enough danger in and around the Palace penalty area.

We have the players capable of scoring, we just don’t seem to know how to break teams down that willingly sitting back.