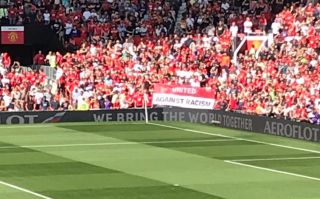 The Stretford End serenaded Paul Pogba before kick-off and the French midfielder responded by clapping their support. An anti-racism flag with MUFC colours also appeared from the stands.

Pogba was subject to racist abuse this week after Manchester United drew 1-1 with Wolves at Molineux.

After winning a penalty in the second-half, Pogba decided he would take the spot kick rather than Marcus Rashford, who scored his pen against Chelsea the week previous. Pogba missed and it caused all sorts of controversy in the media with United dropping two points in their second game of the season.

The MEN reporter took note of the moment shared between the United faithful and Pogba, as seen via Twitter:

Stretford End chanting: 'There's only one Paul Pogba.' He claps them. #mufc