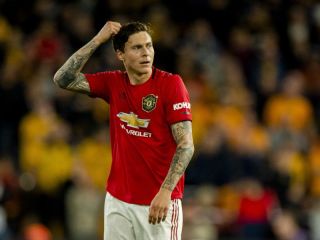 The goal was against the run of play and resulted from some shabby defending on United’s part.

Victor Lindelof was beaten far too easily in the air and Palace were clear on goal.

Nobody was close enough to step in if one of the centre-backs needed support.

Luke Shaw had picked up an injury before the goal but decided to play on, despite holding his hamstring.

But on Twitter a lot of fingers were pointed at Lindelof, as seen below:

Think Lindelof should have done better for that goal…

Smash and grab for Palace. Lindelof at fault. Long pump up the pitch, loses the header with Schlupp and no one tracks Ayew. Lindelof of 2017 there. #mufc

Lindelof and Maguire were so far apart, that was a terrible goal to concede.

Lindelof what the hell are you doing?!

Why was nobody covering Lindelof?

How does Lindelof lose a header to Schlupp? And Ashley Young comes on. pic.twitter.com/rWmwFKYv6L

Lindelof got to do better in the air, there. can't get beat by route 1 ffs.

That is awful from Lindelof