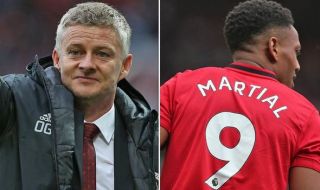 12th September 2015 is a day the United faithful will never forget. Surely, Anthony Martial feels the same. Freshly signed by Manchester United for a hefty fee, he stepped onto the pitch as a substitute against Liverpool with the pressure of being British football’s most expensive teenager and the weight of the symbolic number 9 jersey on his back.

Martial’s arrival led to a mix of excitement and confusion by all. Wayne Rooney reportedly had to ask then team-mate Morgan Schneiderlin who Martial was. In the 86th minute of his debut, that question was answered. After picking the ball up on the left wing, Martial drove at the Liverpool defence. He isolated Skrtel, twisted him one way then the other, knocked the ball through his legs only to calmly put the ball in the bottom right hand corner. It was ecstasy.]

Martial went on to have a fantastic first season with the club, scoring 18 in all competitions. For such a young inexperienced player he seemed to have the self-belief and cajones to succeed as United’s number 9. Then, Mourinho arrived. Zlatan Ibrahimovic swiftly followed and was handed Martial’s squad number without a problem. Instantly, there was a sense that Mourinho doubted the youngster’s ability to lead United’s line.

He was shifted out on to the left wing and asked to play a more defensive and restrained role in Mourinho’s pragmatic system. Minutes were harder to come by as Rashford was preferred for his higher tolerance for tracking back. When Zlatan left, in came Romelu Lukaku to fill the void. In Jose’s time at United, he dug out Martial publicly over his performances numerous times. I’m sure it was a tactic intended to toughen up and challenge the French wonderkid but ultimately it was shown to be poor man management by the former United boss. There was always the sense that, if allowed, Jose would offload Martial in a heartbeat.

When Romelu Lukaku was sold to Inter Milan this summer, everyone wondered who United would get to replace the Belgian up top. For all his obvious flaws as a striker in the modern game the fact remains that Lukaku had a respectable goal scoring record with the club. The transfer deadline came and went with no new centre forward being brought in. Instead; in his first full season as United manager, Ole chose to restore Anthony Martial as United’s number 9. It’s a symbolic gesture from the Norwegian; one designed to inspire confidence in Martial in the hope that he will deliver. It’s no doubt that the French international reacts better to carrot than stick.

So far, against Chelsea and Wolves, Martial has repaid Ole’s confidence. He’s bagged a goal in each game and has looked sharp up top in a system seemingly designed to get the best out of both Martial and Rashford. Against Chelsea, Martial scored the type of goal Ole Gunnar Solksjaer would be proud of. An intelligent run into the six-yard box was greeted by an Andreas Pereira cross. Martial held off the defender before diverting the ball past the keeper. Fittingly, he pointed towards the number on his back during his celebration. At Molineux, he caught Rui Patricio off guard; smashing a powerful left footed shot from the left-hand side of the box which flew past the Portuguese stopper.

He looks renewed so far this season, as if he’s relishing the responsibility again. His overall play has been better and surprisingly Ole has seemed to inspire him to press opposition defences. United fans will be hoping that he continues his fine form in front of goal against Crystal Palace on Saturday afternoon and Martial will surely back himself against a Palace side that haven’t started the season well. He will undoubtedly have dips in form this season but under a manager who believes in him and knows what it takes to be a successful striker at United, it looks plausible that Anthony Martial will re-establish himself as a great United number 9.