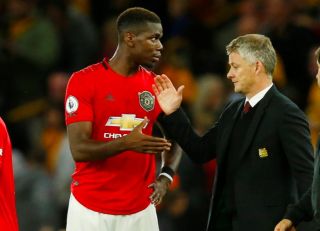 Pogba was subject to abhorrent racist messages following the 1-1 draw away to Wolves on Monday night.

The Frenchman missed a penalty in the game, prompting a tiny minority of supporters to turn to social media and racially abuse him.

It’s disgusting to see this sort of thing still going on, and Solskjaer hits the nail on the head when he says those in question must have problems themselves to hurl such abuse online.

It’s far too accessible for people to set up anonymous Twitter accounts and have the freedom to say whatever they please.

There has to be more done to prevent the trolls, but it has to be acknowledged that this a societal problem, not just a football one that is in need of being addressed.

See what Solskjaer had to say on the incident below, as quoted by Manchester Evening News reporter Samuel Luckhurst.

Solskjaer on trolls: 'You just feel sorry for them, they must have problems themselves when they have to do this.'