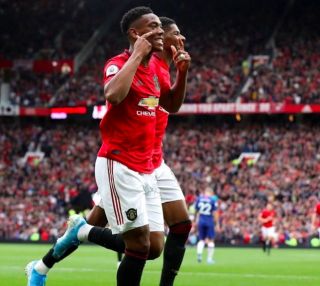 The game represents a great chance for Ole Gunnar Solskjaer’s side to get back to winning ways after being held by Wolves on Monday night.

Crystal Palace have yet to score a league goal this season, and were defeated 1-0 by Chris Wilder’s Sheffield United last weekend.

It’s going to be tough for Palace to break their goal drought against the Reds, who are looking solid in defence with new signings Harry Maguire and Aaron Wan-Bissaka both making an early impression.

Meanwhile, it’s a great chance for Anthony Martial to continue his scoring form.

We expect Solskjaer to select the Frenchman up front again, but he may have to be patient in getting his opportunities against what will be a defensively minded approach from Roy Hodgson’s side.

If Martial does score, he will become the fourth United player to score in the opening three games, joining an elite group of forwards to do so in Dwight Yorke, Ruud van Nistelrooy and Wayne Rooney.

Sky Sports pundit Charlie Nicholas also thinks it will be a comfortable victory for Solskjaer’s men; he has gone 3-1 United.

We predict us to ease to a 3-0 victory against the Eagles, as long as we can find an early goal.