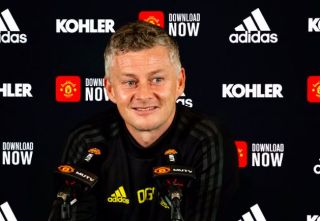 Manchester United manager Ole Gunnar Solskjaer has explained what his side must do to beat Crystal Palace at Old Trafford on Saturday.

The Reds go into the game high on confidence, after an unbeaten start with good results against Chelsea and Wolves.

Roy Hodgson’s Palace side have made a slow start this season, and have yet to score a goal in two league games.

However, as Solskjaer notes, the opposition are very organised defensively, only conceding one goal in the opening two matches.

It’s not going to be easy to break the Palace defence down initially, but there is a hope if the Reds can get an early goal then the floodgates may open as the Eagles chase an equaliser.

United have looked solid so far in defence with new signings Harry Maguire and Aaron Wan-Bissaka barring a shaky 10 mintute spell at Wolves, so we expect a clean sheet for Solskjaer’s men tomorrow.

See how Solskjaer thinks the game can be won below:

"So we know we'll have to do all parts of the game well," says the boss. "We have to attack well, we have to win the ball back quickly and we've got to be strong on set-plays." #MUFC