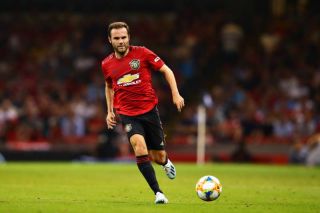 Juan Mata is the longest-serving Manchester United player of the post-Sir Alex Ferguson era and will mark his sixth anniversary as a Red in January.

The Spaniard has probably been the best signing since then too, though United fans will admit they haven’t seen him truly at his best and now at 31 there are question marks over how often he will feature this season.

Ole Gunnar Solskjaer has called upon Jesse Lingard so far this season and there are calls for Angel Gomes to start this weekend against Crystal Palace. Mata must remain patient and show his importance to the side when called upon.

He was asked about the pressures of playing for United in an interview with Jason Burt at the Telegraph, and touched on how the Red Devils attract more media attention than any other club.

“We know that fans of this club have been used to winning and when you are in a period of change – Sir Alex leaving and different managers – and trying to win this Premier League title again which we haven’t won for six years then of course there is pressure from the fans, from the media and everywhere,” Mata said.

“But there is only one way you can deal with it and that is to face it and manage and cope with the pressure and I think you do that on a daily basis. If you do your routine right, if you train right, if you demand from each other then it will pay off and you will be able to handle it better. Also you need to realise who you are playing for.

“You journalists speak more about United than other clubs, right? That’s something I realised from the first moment. If you see pundits on TV – a lot of ex-Man United players. If you see the newspapers there is always something on Man United. Even if it is a small story it is bigger because it’s Manchester United. The level of repercussion is crazy which makes you think even more on how united we have to be with the fans, club, players because you have that sense that everyone who does not support United is happy when United loses. That’s a fact.

“Everyone wants us to do bad which has to make us stick together even more and get that feeling that we are back. That’s one of the things that makes this club special. It has done many, many great things over the years which is very difficult to match but when we are in the position of having an historical advantage then it also feels good. You cannot get it like that (clicks fingers). It takes time and you need winning and you need a club’s culture. And culture is also something I have learnt since I have been at this club. Its culture is key from the first moment and I’m happy that I can say I’ve learnt that and it’s important that every new player who comes to the club understands what Manchester United is.”

Mata is a senior head in a young dressing room and, although he doesn’t feature in the starting eleven as much as he’d like, he’s the sort of professional you’d want younger players to learn from.

We all hope he can have a positive impact on United’s season.