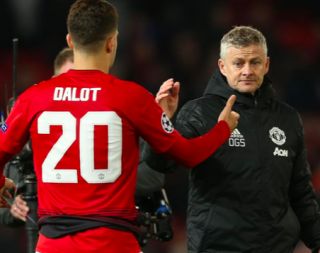 The defender has not featured in either of Solskjaer’s match day squads in the Premier League this season, and will miss Saturday’s game against Crystal Palace at Old Trafford.

Dalot has not been involved in a United squad since being an unused substitute in the final pre-season game against AC Milan in Cardiff.

“Diogo is injured, he’ll be out for a little while, hopefully he’ll be back for (the games) after the international break. He’s had a problem for a couple of weeks. But that’s it,” Solskjaer told the United app as quoted by Manchester Evening News.

As per MEN, Dalot is not expected back until after the international break in mid-September, where the Reds face West Ham and Leicester.

The Portuguese youngster impressed last season under Solskjaer and we hope he gets plenty of first-team minutes when he returns from his set-back.

Dalot proved his versatility last season by operating in a more advanced role, which he may get the opportunity to repeat again this season with new signing Aaron Wan-Bissaka looking to nail down the right-back spot.

Other than Dalot, there are no fresh injury concerns for Solskjaer’s side who go into the game against Crystal Palace at full strength.