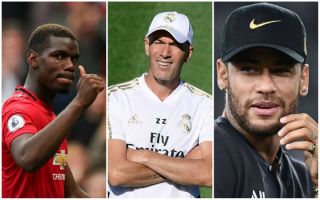 That’s according to French newspaper L’Equipe, with the report going on to note a deal to sign the PSG star being more likely before the European transfer deadline.

Manchester United are not going to sell Pogba at this stage, with the opportunity for English clubs to make signings gone, and he’s the best player Ole Gunnar Solskjaer has going into what will be a challenging season.

The Red Devils are going to be fighting for a top four finish and face plenty of competition. It’s important that Solskjaer doesn’t lose anymore starting players and is allowed to make one or two additions when the transfer window reopens in January.

As for Real Madrid, they’ve got off to a winning start this season but there’s still a lot of uncertainty around Zidane’s team. He has wanted Pogba all summer but United have yet to receive an adequate offer for the France international.

But imagine having Pogba and Neymar in the same dressing room? Only at Real Madrid.

It would be circus esque watching them fight for attention.