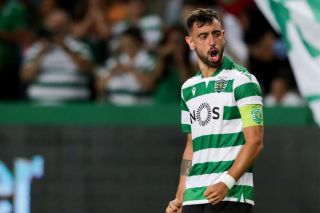 Bruno Fernandes to Manchester United had to be the most talked about ‘non-transfer’ of the summer.

Many United fans were convinced that the Portuguese international would move to Old Trafford this summer, after weeks of rumours he was close to a move.

We ended up reaching Wesley Sneijder and Nicolas Gaitan territory with the transfers that never actually materialised, partly because we were being fed fabricated stories from the Portuguese press claiming a medical was round the corner every 48 hours.

But the reason Fernandes was talked about so much was because he was exactly what Ole Gunnar Solskjaer’s side needed.

The 24-year-old scored 32 goals last season, and could have provided the creative spark in midfield that United should have been targeting.

But as explained by respected journalist Sam Pigler below, Fernandes was ultimately seen as overpriced and not worth the hype that had been going around social media.

Unless something dramatic happens, Bruno Fernandes will not be joining #MUFC this week. There was some early interest, but ultimately seen as overpriced and not worth the hype or money by the club. Portuguese and Italian media have over exaggerated interest all summer.

Instead, the attacking midfielder remained at Sporting Lisbon, which even surprised Portugal captain and Man United legend, Cristiano Ronaldo.

“In the national team you have [Joao] Cancelo, Bruno Fernandes, who nobody knows why he doesn’t leave,” he told TV1 as quoted by the Star.

Solskjaer has gone in to the season a midfielder light after the exit of Ander Herrera, but we hope that the issue can eventually be resolved if one is brought in during the January transfer window.