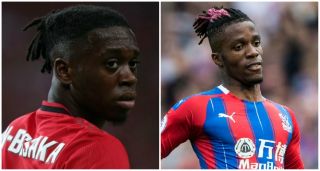 Manchester United host Crystal Palace on Sunday with Ole Gunnar Solskjaer’s side looking to get back to winning ways after being held to a 1-1 draw with Wolves on Monday night.

The Red Devils are heavy favourites to get their second home win of the season, although early season optimism has faded since the 4-0 win against Chelsea from the opening weekend of the campaign.

Solskjaer’s side must show they can break down teams who deploy a defensive game plan, which Palace are bound to do, like in last season’s Old Trafford stalemate.

READ MORE: Djemba-Djemba reflects on his time at Man Utd, pressure of replacing Roy Keane & having no regrets

Palace started the season with a decent draw against Everton, though a 1-0 defeat at Sheffield United suggests it may be another topsy-turvy season for Roy Hodgson’s men and he has a job on his hands to keep star player Wilfried Zaha happy after the former United winger made it clear he wanted to leave Selhurst Park this summer.

Solskjaer may look to start Spanish playmaker Juan Mata considering Palace are likely to sit deep against United rather than opt for pace on the right flank with Daniel James, who started in place of Andreas Pereira against Wolves.

Alexis Sanchez and Marcos Rojo are linked with moves away from Old Trafford, so it remains to be seen whether either of those players will play for United again.

Hodgson only has two absentees to deal with as James Tomkins nurses a groin injury and Mamdou Sakho is recovering from a knee injury.

It is difficult to see how Palace will leave Old Trafford with anything other than a defeat. United have the personnel in attack to inflict an embarrassment on the visitors this weekend, although we need to see an improvement in chemistry between players in the final third to create more clear-cut chances on goal.

An early goal should set the tone for the Red Devils.