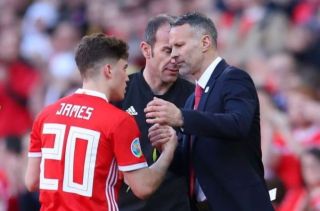 James was correctly booked for diving in United’s 1-1 draw with Wolves at Molinueux on Monday.

But the United legend thinks these incidents are likely to happen because of the way the youngster is targeted.

“The speed he’s going at it can look worse,” said Giggs, as quoted by BBC Sport.

“Sometimes when you anticipate it, it can look like a dive.

“You’ve seen he gets kicked a lot. He gets a lot of stick and referees need to protect him, but I’m not worried.”

James made his first competitive start under Ole Gunnar Solskjaer on Monday after coming off the bench to score a dream debut goal against Chelsea in the opening game.

The Welshman has made an encouraging start to his United career, and his electric pace is clearly going to cause real danger for Premier League defenders.

Of course, James will have to eradicate incidents occurring like the simulation against Wolves, but he is a promising signing for the Reds.

He proved he can operate from the right-wing position on Monday night, and will hope to retain his place in the role against Crystal Palace on Saturday at Old Trafford.

We expect Solskjaer to name an attacking line-up against the eagles in order to secure victory, and it will be interesting to see how the Welshman fairs if he gets his first start at Old Trafford.

James has been included in Wales’ squad for the Euro 2020 qualifier against Azerbaijan next month.