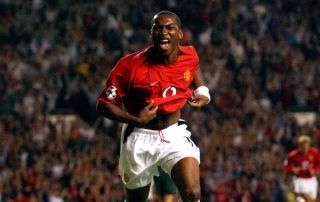 So good they named him twice!

Eric Djemba-Djemba wasn’t exactly the new Roy Keane when he rocked up at Old Trafford in 2003, but I’ve heard people saying ‘we need a Roy Keane’ for the best part of 14 years now and it’s time to come to the realisation that one doesn’t exist.

After spending two seasons at Nantes in France, Sir Alex Ferguson and his scouts liked what they had seen in the tough-tackling midfielder. So much they parted with £3.5m to secure his signature.

United won the title the previous season – our last for four years – and Fergie endulged in a busy summer. David Beckham, Juan Veron and Fabien Barthez all left, while a host of other players arrived. Cristiano Ronaldo, Louis Saha, Tim Howard and Gabriel Heinze were all good buys, while Kleberson, Dong Fangzhou and David Bellion didn’t quite give us any memories to reminisce over.

(Not forgetting the guard of honour Chelsea gave Premier League champions United in 2007 — with John Terry, Claude Makelele, Michael Essien and others all wishing they were in Dong’s shoes.)

In a recent interview with AmericanGambler.com, Djemba-Djemba opens up on the pressure of replacing Keane and says he has no regrets about his time at United.

“Of course, I was young coming from the league in France and back in the day it was not like the Premier League, which was the hardest pressing league in the world,” said Djemba-Djemba.

“It was a lot of pressure – we’re talking about Roy Keane – the man, the captain, he was hard. It was difficult for me. I did my best and I played some good games, but it was hard for me. My teammates helped me and Sir Alex Ferguson helped me. To be there was everything, and I have no regrets. Today I’m happy as I can look back as I won the FA Cup and The Charity Shield and it is the trophies that people remember. If people recognise me around the world, it’s because I was part of that team.

“I have no regrets and I will never forget Sir Alex Ferguson because he changed my life. He took me from Nantes and brought me to England and everyone knows Djemba-Djemba because of him.”

Keane wasn’t getting any young and Djemba-Djemba was seen as a possible solution for the Corkman. He flattened Sol Campbell in a Charity Shield match which led to many thinking United’s almighty captain could be replaced by the young African, but that view didn’t last very long.

The former Cameroon international did suffer a lot of injuries during his 18 months at Old Trafford, but you would be foolish to use that as an excuse for him not being quite up the required standard to play for United.

He scored in the Champions League against Panathinaikos and netted an extra-time winner against Leeds in the League Cup, so let’s not reflect too negatively on his time at the club.