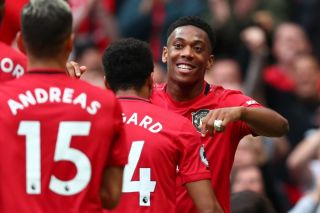 Manchester United are unbeaten in their last 22 league games against Crystal Palace (W18 D4) since losing 3-0 at Selhurst Park in May 1991.

So, on Saturday the Red Devils are looking to continue their near perfect record versus the Eagles, which has lasted 28 years.

Another stat to keep an eye on ahead of the kick-off on Saturday is Anthony Martial could become the fourth United player to score in the opening three games of the season after netting against Chelsea and Wolves in recent weeks.

It’s almost been four years since the Frenchman made his United debut and it’s been a mixed bag due to his struggles over consistency since arriving at Old Trafford from AS Monaco.

A goal this weekend would see Martial become a member of an elite group of United forwards, including Dwight Yorke, Ruud van Nistelrooy and Wayne Rooney.

This doesn’t mean Martial has become a more accomplished striker overnight, but it shows he is heading in the right direction at least.

United are relying on him and Marcus Rashford for goals this season.