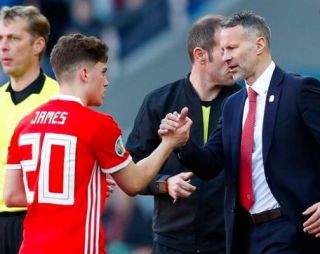 Ryan Giggs had a role to play in the move for Daniel James, after manager Ole Gunnar Solskjaer asked the United legend about the Swansea winger.

James is coached by Wales manager Giggs for the national team, so he clearly knows a lot about the youngster.

Giggs described the £15m transfer as a no ‘brainer’, after his development in the Championship last season.

James has made an encouraging start to life at United, scoring a dream debut goal at Old Trafford against Chelsea, and making his first competitive start away to Wolves on Monday Night.

The 21-year-old showed positive signs at Molineux, his speed is frightening and will cause problems for any defender in the league.

But as the Giggs explains below, James still has plenty to work on if he is to establish himself as a regular in Ole Gunnar Solskjaer’s first-team set-up.

We’re looking forward to seeing the Welshman continue to develop under Solskjaer this season; there’s plenty more to come from the new signing.

"Daniel James signing was a no-brainer"