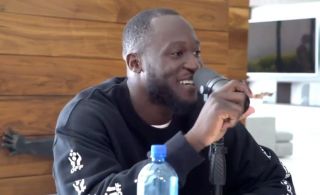 Romelu Lukaku has turned to appearing on podcasts since leaving Manchester United for Inter Milan. Or any platform that will let him work on his terrible put-on American accent.

Seriously, where did he develop that one from? I don’t recall hearing it during his time at United and what’s worse is his clear attempt to slag off former team-mate Anthony Martial.

Martial didn’t make the France squad for their triumphant World Cup campaign in 2018, so Lukaku has used that to make a joke about the 23-year-old.

We don’t know if this is something Lukaku and Martial previously joked about, though it doesn’t sound like something the Frenchman would appreciate.

Check out the video snippet below:

Now at Inter Milan, Lukaku’s time at Old Trafford came to an end when he slipped down the pecking order following Ole Gunnar Solskjaer’s arrival.

The Norwegian boss made it clear from the start that his striking preference would be Marcus Rashford, however, he is trying to form a partnership this season with Martial, with both scoring two goals from the opening two games.

Hopefully Martial is back scoring for France soon and Lukaku is seen somewhere eating… his words! 😉