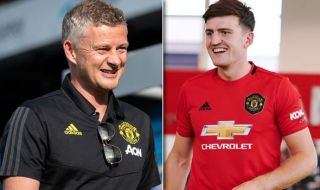 The first two games of the season are over and Manchester United beat Chelsea 4-0 and also drew 1-1 away to Wolves but one of the most pleasing aspects was how United defended and how Aaron Wan-Bissaka and Harry Maguire performed in their first two games.

In the first game, they looked more composed and assured at the back and it does seem that building from the back does seem to be the way to go for Solskjaer.

Manchester United signed Leicester’s Harry Maguire for a world record fee for a defender with a fee of £80m, as reported by BBC Sport. This ended United’s pursuit of a centre half and added some stability to the defence which has seemed so brittle over the last few years.

This is seemingly a big statement of intent for both Manchester United and Ole Gunner Solskjaer, United finally paying up to fix a problem position and Ole getting players who will help him achieve his vision for the club in the process.

Maguire would join Aaron Wan-Bissaka as United’s second defensive transfer as Solskjaer looks to tighten a defence who conceded a club-high 54 goals in the league last season. The last time United conceded over 50 goals in a league season was 78/79 season but this was in a 42-game season, not a 38-game season.

Solskjaer seems to want to alter the team’s style to a higher energy pressing game going forward but also aim to be tougher at the back, a watertight backline would give the attackers more confidence knowing they wouldn’t have to score two or three a game to win.

After passing the Chelsea test, United played Wolves away and at a ground where United struggled last year Maguire did not and Wan-Bissaka also excelled in the draw. Maguire could not do much about the goal which was a world-class finish from Ruben Neves but was strong and handled all Wolves threw at him.

If you go through the United archive, we all know that the great teams of the past scored lots of goals, but they were built on great defence. Sir Alex Ferguson first title came the year after he signed Paul Parker from QPR and Peter Schmeichel from Brondby in 91/92 season to add to Gary Pallister, Steve Bruce and Denis Irwin. After losing the title to Leeds that season, he added a mercurial Frenchman named Eric Cantona and the rest is history, but the foundations were there waiting for that spark.

Fast forward to 1998/99 season Ferguson signed Jaap Stam for an eye-watering £10.75m from PSV Eindhoven and he helped turn United into European champions adding to a defence of Schmeichel, Irwin, Gary Neville and Ronny Johnsen.

January 2006 was similar to this Transfer Window as Ferguson bought Patrice Evra from Monaco and Nemanja Vidic from Spartak Moscow, a full-back and centre-back, these signing helped United dominate both domestically and in Europe. With Neville/Wes Brown, Rio Ferdinand and with veteran keeper Edwin Van der Sar in goal even setting a record for longest streak without conceding a league goal(14 games, 1,311 proving how tight they were as a unit.

This seemingly is what Solskjaer has learned from his time at the club, that no matter how talented the forward line is at a club it’s usually the best defence that wins the trophies come May.

Now we will all have our opinions on Maguire, too slow, too expensive etc but he is an upgrade on what we do have so we are moving in the right direction. With reports that David de Gea has agreed a new long-term deal means United are trying to build a defence that will propel the club forward.

Solskjaer will have to wait until the European window shuts at the start of September so he can sort out players with question marks over Marcos Rojo, Matteo Darmian and their futures. Young Axel Tuanzebe will hope to force his way into the squad after impressing out on loan to Aston Villa, now the window has shut, and he is still here I think Ole has plans for him maybe Cup games dependant on injuries.

Fans might have been upset by the fee for Maguire but United have spent big on defenders before with Ferdinand, Stam so this is nothing new. We all know Maguire’s quality as we have seen him perform in the Premier League for Hull and Leicester, I have always been impressed when I have seen him live so I hope his physical presence and ability on the ball will help keep United tight at the back.

Many people have seen United’s defence as a big problem but with Wan Bissaka’s arrival and De Gea’s new deal coupled with Maguire’s potential, it does seem United are slowly putting the pieces together to get back to the being tight at the back but more work needs to be done in other areas.