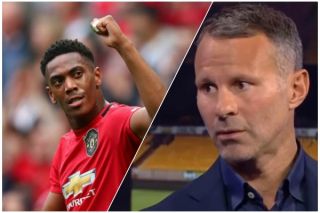 Anthony Martial has started the 2019/20 Premier League season brilliantly with two goals from as many games.

If the Frenchman can keep this level of form up throughout the season, he should be netting at least 20 goals which needs to be the aim for Marcus Rashford too.

Martial is looking to improve his tally of 10 league goals last season, so 20 may seem an unrealistic rise over the course of this term…

Manchester United legend Ryan Giggs believes the 23-year-old has what it takes to go to the next level if he can remain consistent throughout 90 minutes and not fade in and out of games, like he’s done a lot over the past 2-3 seasons.

“I’ve worked with him and he can do it,” Giggs told Premier League Productions, as quoted by the Manchester Evening News. “He is strong, and he can hold up the ball, proper centre-forward play. Balls into the channel, chesting it down, holding it up and laying it off and getting in the box, I think there’s a lot of promise there.

“He has to do it now for 90 minutes. If I was Ole Gunnar Solskjaer watching that, I’d be very pleased with his overall performance.”

Martial scored United’s only goal in the 1-1 draw against Wolves at Molineux on Monday night and should have added another, but it’s no surprise that the Wales manager was impressed with the skill shown by the France international.

“It was a great goal,” Giggs said. “Of course you look at goals, what could you have done better defensively, but you’ve got to look at the goal and think: ‘Well done, great strike’. There’s not many players that can do that.”

The Red Devils host Crystal Palace on Saturday and Martial is expected to start along with Rashford again.

United fans will be hoping for something similar to the Dwight Yorke and Andy Cole strike partnership that won so many games for Sir Alex Ferguson. Though if only one of them picks up an injury during the season, Solskjaer may only have young Mason Greenwood to fall back on.

That’s a lot of responsibility for a young player – not that Martial or Rashford are proven enough to be leading United’s attack going into a new season.