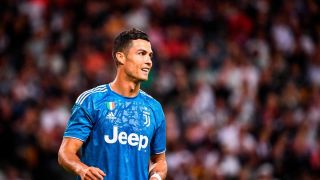 TVI in Portugal has released an exclusive in-depth interview with Juventus and Portugal star Cristiano Ronaldo.

The former Manchester United attacker discussed a range of topics in detail and spoke a bit about retirement.

“I don’t think about that,” Ronaldo said, as quoted by 101 Great Goals.

“I don’t know. What I always say is to enjoy the moment. The gift is excellent and I have to continue to enjoy it.”

This will be Ronaldo’s second season at Juventus following his switch from Real Madrid.

READ MORE: Cristiano Ronaldo explains the differences between himself and Lionel Messi

Not long ago, there was constant speculation about the Portuguese superstar returning to Old Trafford, where he spent six memorable years, winning three successive Premier League titles, a Champions League, Club World Cup, the FA Cup and two League Cups.

Now 34 and under contract in Turin until 2022, we can sadly say that boat has sailed.

The aim this season for Juventus is one the Italian club has had since 1996 and by signing Ronaldo they undoubtedly boosted their chances of winning the Champions League. And, by adding Matthjis de Ligt to the frame this summer their chances should be greater again.

He already has five Champions Leagues to his name, which is a remarkable feat when you think back to the young boy we signed many moons ago from Sporting.

What a delight it was to see him develop into one of the greatest footballers to ever play the game.