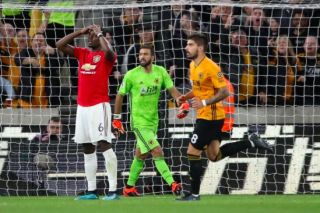 According to reports, Ole Gunnar Solskjaer was left fuming after the penalty debacle at Molineux on Monday night.

Paul Pogba stepped up and missed a golden opportunity to give United all three points, despite Marcus Rashford not yet missing a competitive penalty for the Reds.

Rashford scored emphatically the weekend before against Chelsea, but Pogba has now missed four spot-kicks in the last twelve months.

It’s baffling that Pogba was allowed to take the penalty given the comparison in records between the pair, but all would have been forgotten if the Frenchman had tucked the ball away and United secured a crucial away win.

Because Pogba’s penalty was saved by Rui Patricio, there has been plenty of backlash with Solskjaer’s managerial strength even coming into question by some pundits.

Solskjaer had said in the aftermath that Rashford and Pogba both share penalty duties, but now, according to the Sun, the Norwegian has designated Rashford as the club’s permanent penalty taker.

This seems a no brainer to have a consistent taker and Rashford should have been on duty against Wolves. It’s time Pogba was taken off penalties after four misses in the past year, and the Englishman has not yet put a foot wrong from 12 yards out.

Let’s hope the next time the Reds get a pen, Rashford can fire home with the same conviction he did to open the scoring against Chelsea.