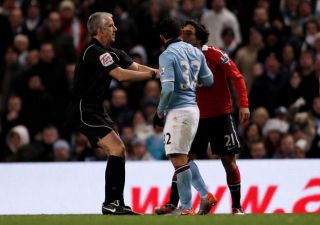 Rafael da Silva famously squared up to Carlos Tevez during a Manchester derby in 2010 and he has recalled the incident in an interview with The Republik of Mancunia.

“I wouldn’t like to criticise anyone who does this, but personally, I think that when you have a certain identity with one team and then go to a rival, well, I wouldn’t do that,” Rafael said. “Maybe because I liked Man United so much and for him, perhaps, he did not have this same feeling, so maybe that’s the difference.”

Rafael deserves the upmost respect for his 8-years spent at Manchester United. It was just a shame to see such a fan favourite leave under a grey cloud – which was entirely down to former manager Louis van Gaal.

He always worked hard, got his rewards and had some great moments along the way.

It’s no shabby feat to leave a club after winning three Premier League titles, so Rafael can reflect fondly on his time at United, like he did in an exclusive Stretty News interview not long ago.

But one of my favourite moments from his time at United was the clash with Tevez after the Argentine had left the club to join Manchester City. Or when he gave it to a bunch of Liverpool players at Anfield.

Rafael wore the shirt with pride and could have been a useful player at right-back up until we signed Aaron Wan-Bissaka!