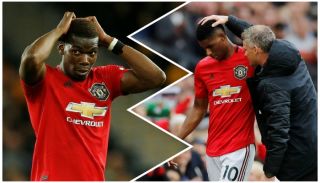 Paul Pogba’s team-mates at Manchester United are coming together to defend their friend who has been subject to racist abuse online.

The France international missed a penalty in United’s 1-1 draw with Wolves on Monday night, which resulted in idiots sending him vile abuse via Twitter.

Rashford has rallied behind Pogba by urging Twitter to take a share of the responsibility for the racist abuse that is routinely targeted at footballers on the social network.

Manchester United is a family. @paulpogba is a huge part of that family. You attack him you attack us all… @ManUtd https://t.co/PgalnFQMeu

An important message and it’s important that United and Pogba’s team-mates speak out against racism.