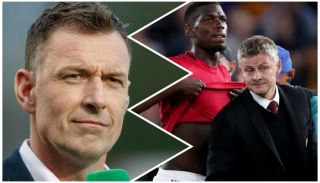 Former Blackburn striker Chris Sutton has took aim at Ole Gunnar Solskjaer and his decision not to have a designated penalty taker.

Speaking to BBC Sport, as quoted by the Manchester Evening News, Sutton put it all down to weak management.

“It is the job of the manager to designate. That is a huge moment. United could have won the game.

“You can’t say, ‘I’ll leave it down to the players’. I like Ole but that’s weak management.

“Rashford may have missed as well, but we’d have understood because he took the last one. He shouldn’t be allowed to make that decision himself. It wouldn’t be allowed under someone like former manager Sir Alex Ferguson.”

I agree with what Sutton is saying here, but he had to go ruin it by suggesting what Ferguson may have done instead.

Solskjaer is his own man and even when he talks about Fergie – or the apparent refusal to park in the gaffer’s spot at Carrington – it makes me cringe a little.

He and everyone else needs to realise that Solskjaer is the manager of Manchester United. The Norwegian needs to make the job his own while it’s in his hands.

Fergie was the greatest manager of all-time and he can take influence from the Scot, but Solskjaer is destined to fail unless he does things his own way.

Maybe that means allowing the players to make decisions on who takes penalties. I don’t really care as long as it works!