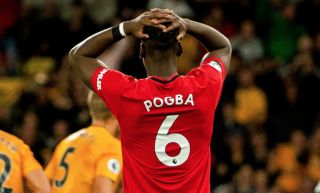 Paul Pogba has become the latest footballer to have racist abuse directed at him on social media, following a penalty miss against Wolves on Monday night.

The France international, 26, had a second half spot-kick saved during United’s 1-1 draw at Molineux.

This vile behaviour is becoming all too familiar in the game and social media companies as well as football clubs need to find a way to tackle it.

On Sunday, Reading striker Yakou Meite called out online racist abuse after his penalty was saved.

And last week it was Chelsea’s Tammy Abraham who was subject to more disgusting abuse after his Super Cup final miss against Liverpool.

It’s a shame footballers in this day and age have to put up with such nonsense, and it makes you wonder how long we will go before football clubs decide to take a break from social networks until their fans (some pretending to be fans from other clubs, no doubt) wise up.

A quick read through Twitter now and you’ll see plenty of tweets from United fans condemning the racist abuse that was sent to Pogba – who won the penalty and decided to take it instead of Marcus Rashford before missing – shortly after the game.

Disgusted to see Pogba is the latest footballer to have racist abuse directed at him on social media. Some wrong uns out there!

Some of the tweets containing racist abuse were later deleted or removed – as were the accounts they came from.

The club issued the following statement, as per Simon Stone of BBC Sport.

“We will work to identify the few involved in these incidents and take the strongest course of action available to us. We also encourage social media companies to take action in these cases."