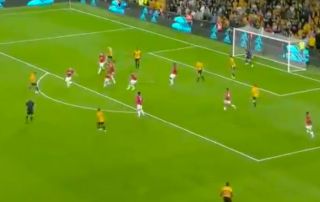 Ruben Neves has curled in a sensational equaliser early in the second-half against Manchester United.

The Portuguese midfielder is known for his exploits from outside the box, and the Reds gave him too much space on the edge of the box after a well-worked Wolves set-piece.

Neves’ strike was unstoppable for David De Gea, who saw it bounce off the inside of the bar into his net.

Moments earlier, Raul Jimenez came inches from levelling with a header that came off the inside off the post.

The goal was checked for an offside in the build up, but there was no conclusive to disallow Neves’ strike.

Wolves lacked any threat in the first-half but have come out firing after the break, with the substition of Adama Traore giving a new dimension to their attack.

Solskjaer’s men must now rebuild reassert their dominance in the game.

A truly sensational goal gets Wolves level against Man United!