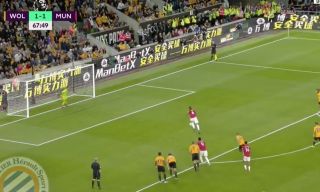 Manchester United had a golden opportunity to take the lead from a penalty kick, but Paul Pogba’s effort was saved by Rui Patricio.

It is a wonder that Pogba is still on penalties when Marcus Rashford scored so empathically last week, against Chelsea.

But with the scores still level, it looks like United face a bit of squeaky bum time after Pogba’s miss.

United conceded after the break with Ruben Neves scoring a stunning but controversial goal, which was checked and permitted by VAR.

Big 20 minutes or so coming up…