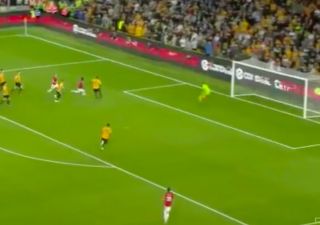 Anthony Martial has given Manchester United the lead against Wolves at Molineux.

After an interchange between Marcus Rashford and Jesse Lingard, Rashford fed in the Frenchman who made no mistake in front of goal.

It was a classic striker’s finish from Martial, a lofted left-footed effort past Rui Patricio in the Wolves net.

The goal brings up Martial’s 50th for the Reds, and there will be plenty more coming the way he has started this campaign.

It’s been tough for Solskjaer’s side to create many openings to break down a deep lying Wolves defence, but Martial was clinical when played through.

Arguably the best goal this season for our very own Martial against a stubborn Wolves#WOLMUN viva #GGMU pic.twitter.com/IeuwXTSwjR

5️⃣0️⃣ #MUFC goals up for the Frenchman! 🇫🇷

👏 Anthony Martial keeps his strong start to the season for #MUFC going.