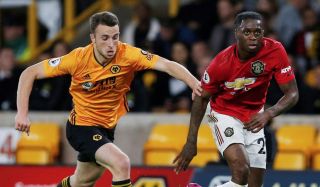 Aaron Wan-Bissaka put in another solid display for Manchester United tonight, although the Red Devils couldn’t did enough to take all three points away from Wolves.

Ole Gunnar Solskjaer’s side had to settle for a point after Anthony Martial’s opener was ruled out by a Ruben Neves goal at the beginning of the second half. Then, Paul Pogba stood up to take a penalty and missed.

The result was disappointing but there were some positives to take from the game.

For example, Wan-Bissaka continuing to show why United were adamant to sign him this summer.

He was excellent again, and according to Statman Dave on Twitter, he had more passes in the final third than any other player on the pitch, as well as most tackles won.

United finally have a proper right-back. It’s been a while!

9 more final third passes and 5 more tackles than any other player. 🕷 🕸 pic.twitter.com/JJbaVNluQS