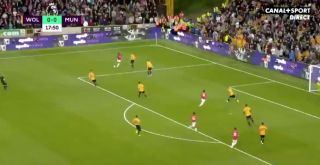 While the action at Mollineux takes place, we couldn’t ignore a moment of brilliance from the England international, even though it didn’t result in an opening goal for Manchester United.

He whipped in a great cross too, but Anthony Martial was unable to convert his chance on goal.

United have dominated possession thus far but haven’t offered enough in the final third to break Wolves down, although they’ve been ultimately defensive from the very beginning, waiting patiently for the break or a lapse in concentration.