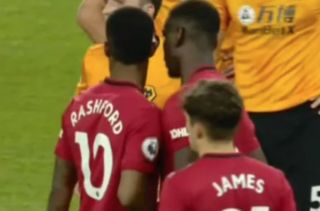 There will be a lot of talk about Paul Pogba’s penalty miss against Wolves in tomorrow’s newspapers.

It’s already been the biggest talking point during the post-match analysis on Sky Sports, with Gary Neville having his say and Ole Gunnar Solskjaer explaining that he has more than one designated penalty taker.

In my view, a lot of it has been blown out of proportion because United didn’t win the game. It was the first time we’ve dropped points this season and it won’t be the last…

READ MORE: ‘Should be winning games like that’: Loads of Man Utd fans react to draw away Wolves

Marcus Rashford scored a penalty last week against Chelsea, so it’s perfectly reasonable to question why our penalty taker changed from then?

The England forward offered an explanation to clear up any confusion around the decision to let Pogba step up to the spot.

The quotes can also be found via Manchester Evening News.

Weird of Rashford to downplay all of this when a striker should be looking to add to his account at every opportunity, but perhaps he’s just trying to save face and let on its not that big an issue.

We should know who’s going to be taking our penalties this season – and Rashford may have had more momentum behind him after already scoring one this season.