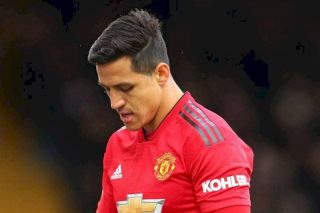 Alexis Sanchez is reportedly waiting on Manchester United’s decision to give him the go ahead to complete a switch to Inter Milan.

Reliable Italian journalist Fabrizio Romano states that the Chilean has asked Solskjaer to leave for Antonio Conte’s side this summer, after a miserable 18 months in Manchester.

Romano claims the deal would initially be a loan move, with an option to buy at the end of the season.

NEXT:‘Need to get him’: Loads of Man Utd fans urge club to sign star Leicester midfielder

Due to the nature of Sanchez’ contract, the Reds will have to pay part of his wages if he was to join the Serie A side.

The 30-year-old has endured a torrid time at Old Trafford and his swap deal move from Arsenal could go down as one of the worst transfers in Premier League history.

It’s still unclear whether Solskjaer will sanction the move, given the lack of options the club now has attack following the departure of Romelu Lukaku.

But we would prefer to see youngsters like Mason Greenwood, who showed great signs of promise in pre-season, rather than the Chilean who now looks the shadow of the player he once was.

A move to Inter may be beneficial for Sanchez to revitalise his career, after he first rose to prominence in the Serie A at Udinese.

The European transfer window shuts on September 2 so Inter have plenty of time to finalise the move if all parties can agree on a suitable deal.

Confirmed: Inter are in talks with Man United for Alexis Sanchez. Loan until June 2020 + buy option for €15M. Part of the wage would be paid by Man Utd too. Alexis asked to the club and to Solskjaer to join Inter. Now it just depends by Man United decision. 🇨🇱 #MUFC #transfers