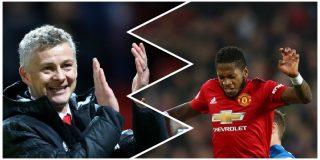 Ole Gunnar Solskjaer still has high hopes for Fred at Manchester United this season, despite leaving him out the squad entirely as United thrashed Chelsea on Sunday.

Fred made just 17 Premier League appearances last season after his move from Shakhtar Donetsk, and has struggled to adapt to English football.

The 26-year-old’s consistent errors in possession are most notable in his play; Fred is often caught taking too long on the ball or misplacing a pass.

Solskjaer opted with a midfield three of academy graduates Andreas Pereira, Paul Pogba and Scott Mctominay for the opening game, which had mixed success for the Reds.

Yes, United won the game 4-0 but there were often huge gaps in midfield to exploit and Chelsea were perhaps unlucky not to be at least level at half-time.

However, it’s likely Solskjaer will give the trio a run of games to prove their consistency, with Nemanja Matic also available as defensive cover.

But the club’s baffling inability to sign a midfielder to replace Ander Herrera this summer means there will still be opportunities for Fred to get game time when the team is rotated for different cup competitions.

Solskjaer confirmed the Brazilian is still in his plans this season.

“Your team will always play better if settled and have a good foundation and not conceding goals,”  the Norwegian said as quoted by the Metro.

“Good teams I played in we always had a strong base, a keeper, settled backline and we hope to provide that for our atttackers and midfielders. ‘We believe Fred is going to have a big season as well.