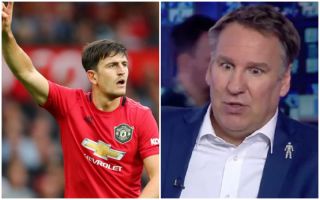 The deal caused some controversy because the transfer fee surpassed the £75m fee that Liverpool spent on Virgil van Dijk in January, 2018.

Maguire, now the world’s most expensive defender, was questioned by Merson ahead of United’s 4-0 win over Chelsea last weekend, during which he was named man of the match.

Former Arsenal midfielder has since gone back on his word and changed his opinion on Maguire.

“He has a presence, he’s commanding, he doesn’t mess about. I thought he did very well,” Merson told Sky Sports’ The Debate.

“I thought I was very critical of him on Soccer Saturday if I’m being honest. I tried to get hold of him today (Monday) and I will talk to him tomorrow (Tuesday) as he texted me back.

“And I thought I was a bit critical if I’m being honest – I thought what I wanted to say did not really come across the way I thought it should have.

“I sort of did not really give him the credit he deserves of how good he is. I was brought up in the day and age where it was clear your lines – a Tony Adams or a John Terry, or someone like that.

“So I was a bit disrespectful in that way. He has played in World Cup semi-finals, he is an international and I was out of order and I will be the first to admit that.

“I thought he was steady. He’s comfortable on the ball, but he will have to defend as time goes on. If Chelsea were more clinical and they had better players up front they would have scored.

“He is a lot better than what they have got. You can look back and say they hit the post and had chances and David de Gea made a great save with his feet., but they still kept a clean sheet. Whoever keeps a clean sheet every week the other team always has a chance to score. He did well and he will get better.”

All three of United’s new signings did well against Frank Lampard’s side; Aaron Wan-Bissaka was incredible at right-back and Daniel James came off the bench to score the fourth goal.

The win put United in second place in the Premier League table, and Maguire will be hoping to build on that over the coming months.

Ole Gunnar Solskjaer had no other choice but to sign a top centre-back this summer, with United keeping just two clean sheets in the league last summer. After the first week of the new season, they’re already one game away from reaching that tally which only emphasises how disappointing our defence was last term!